With the introduction of RunVirtual as an official feature in App-V 5 SP3, the ability to use it for user targeted packages, and the ability of SP3 to set connection group members as optional, I started wondering whether it would be possible to create a connection group for all your IE (or Office) plugins and automatically launch IE (or any Office Application) inside the connectiongroup by using the RunVirtual Registry key, and still start IE (or any Office application) in a specific Virtual Environment by using the /AppVVE: command line hook switch. What I’m thinking of is a default connection group to start IE in for all standard (non conflicting) IE-plugins and separate packages for a specific Java versions. Similar with Office, one connection group for all standard (non conflicting) Office-plugins and separate packages for special plugins (plugins with conflicting versions, conflicting settings, etc.).
Will this work? What happens when an application is started and set to launch in two different Virtual Environments by a conflict between RunVirtual and the AppVVE parameter?

I assumed that the the scenario I described would work because it makes sense to me that it would. But not having the time to test it, I let it be for a while. Until in march when I attended the European App-V User Group event in Amsterdam. There Tim Mangan gave a presentation about the various ways of launching processes in App-V Virtual Environments. This covered the use of the RunVirtual reg-key and the AppVVE command line hook switch. So I asked him the question about what would happen if I had a RunVirtual entry set for a process and started the same process with and AppVVE hook switch to a different virtual environment. Who would win in this conflicting situation?
Tim’s answer was that probably RunVirtual would win because it was designed to be a catch all function. So this kind of crushed my hopes for my scenario, but because Tim said ‘probably’, I still had a little bit of hope and decided to dig further into this.

After a quick google I found an acticle by the Gladiator (Steve Thomas App-V Guru) called ‘App-V 5: The Case of the RunVirtual Collision’ which described my conflicting scenario and stated that this would lead to a “Spinning Donut” on the starting application and the CPU spiking to 100%. So again this did not bode well for my scenario. My hopes were even less then after Tim’s session. But because Gladiator’s article was Pre SP3, I still had a tiny speck of hope. So on to testing my scenario!

First I created an RunVirtual Key for iexplore.exe this points to the ID of the Dummy Package in the IE Plugins Connection group.

I then started IE using the default shortcut. In the App-V manage screenshot you can see that iexplore started in the IE_Plugins connection group and that the flashplayer plugin (also part of the connection group) is also started.

Next I created a shortcut to IE the would start IE in the Virtual Environment of the Java 7.67 sequence.

As you can see in the screenshots above, the ID supplied to the AppVVE parameter differs from that in the RunVirtual registrykey.

Starting Internet Explorer from the new shortcut lead to disappointing results. IE started slowly (with a “Spinning Donut“) and than closed before loading the homepage.

So it seemed that the Galdiator’s post still applied to SP3 and that my desired scenario was not at all possible, but…. and now comes the interesting bit (hope you still with me:-)).

What I did notice was that I could see in App-V Manage that IE was started in the Java Virtual Environment (before it closed) as you can see from the screenshot below. So the AppVVE command line hook was actually winning contrary to what Tim Mangan told me. Interesting! 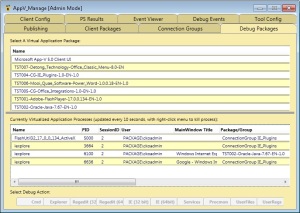 – By the way in the screen shot you see that IE was also still open in the IE Plugins Virtual Environment. I also tested with IE not already open. This gave the same results.

This lead me, just out of curiosity to try what would happen if I did the same with cmd.exe instead of iexplore.exe. Would it have the same outcome? It probably would, wouldn’t it? But I had to know for sure.

So I created a RunVirtual Entry for cmd.exe to the IE plugins connection group (via the dummy package) and a shortcut with a command line hook to the Java Virtual Environment. After starting both this was the result I got:

So next I tried notepad.exe. Same results! AppVVE wins.

After this I was ready to try my Office Scenario. As with IE I created a RunVirtual Key for WinWord.exe to the connection group and a shortcut to the separate sequence, in this case the ‘Power Word’ sequence. At first it did not seem to work with Word. I had started Word using the default shortcut, which launched it in the Virtual Environment Supplied by the RunVirtual entry and then started Word again using the AppVVE parameter. Although Word did not close when starting with the AppVVE parameter, it did not launch in the supplied Virtual Environment. Instead it started in the Environment supplied by the RunVirtual Key. But then I remembered that when Word is already running it does not start a completely new process when started again. This was backed up by not seeing a new process appear in App-V Manage. Supplying the /w parameter to WinWord.exe forces it to start a completely new Process. After that I got the same results as with cmd.exe and notepad.exe, the AppVVE command line hook takes precedence over the RunVirtual entry.

Who wins?
Well we have clear winner! In the case of a conflict between RunVirtual and the AppVVE commandline hook, AppVVE wins. The process is started in the Virtual Environment supplied by the AppVVE parameter. I only tested with SP3. Whether this was also the case pre SP3, I don’t know, but I think it only works with SP3. According to Gladiator’s article it didn’t work with SP2, but his article only covered Internet Explorer and that still has issues in SP3. See below.

Any Issues?
It does not work with Internet Explorer. When IE is started with both RunVirtual and AppVVE a 100% CPU spike is generated and Internet Explorer closes automatically after a few seconds. I don’t know why this happens because different IE processes can run in multiple Virtual Environments at the same time when using just different AppVVE parameters. I thought it might be caused Dynamic Virtualisation, but I also tested with Dynamic Virtualisation disabled with the same issue as a result.

Update: Please see my comments below with regards to IE 11.